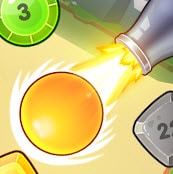 Millions of people are getting hooked by mobile games that supposedly pay hundred and even thousands of dollars.

In this post, I am going to expose another one called Gem Hunter, which advertises payments of $1,000 – $1,500. Here is a screenshot that I took from one of their video ads: 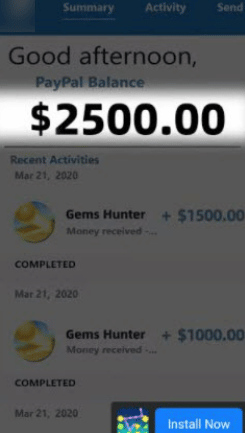 With so many useless fake money apps out there, you need to know whether Gem Hunter is real or fake. Will they pay you or not? Keep reading to avoid frustration!

Don’t forget to check out the step-by-step program that helped me build an internet asset and generate $1,600+ per month. Don’t miss out on the free membership available!

What is Gem Hunter?

Gem Hunter is an addictive game in which you shoot the gems using the cannon.

The app was developer by Len Fox Game, the same creators of this dropping ball game and a few others.

You have to hit the diamonds a specific number of times to eliminate them and collect rewards.

For example, Gem Hunter will give you virtual dollars and tokens if you destroy green and yellow obstacles, respectively. It’s similar to Shooting all Virus in various aspects!

You may also activate the slot machine when the ball falls into the moving target at the bottom.

Next, I am going to show you how Gem Hunter works and all the rewards available for those who meet the requirements.

How Does Gem Hunter Work?

Gem Hunter can be downloaded and installed for free on Google Play.

Apparently, the app doesn’t look very intrusive since don’t need to register, nor give permissions.

However, you are still giving access to anything you store in your phone, such as photos and files.

I wouldn’t put my hand in the fire for companies that create these so-called “money” games.

How to Play Gem Hunter?

Swipe right or left to aim the cannon. Then, release your finger to shoot lots of balls towards the obstacles. 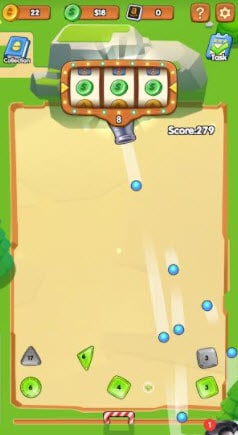 There are gems with different colors and shapes. Each one has a specific number representing the number of times you must hit them.

Every time the ball collides with an obstacle, its number decrease by 1. Keep shooting the same gem until you eliminate it and collect the reward.

There are only three gems:

After every shoot, more gems will appear at the bottom and push up all the other ones. The game is over when a gem hits the red line at the top.

Gem Hunter always gives you extra balls if you tap the button to watch a sponsored clip.

Tired of apps that don’t pay? Check out my top recommendation for making money online!

Gem Hunter triggers the slot machine when a ball falls into the target, which moves from side to side.

In the next section, I will show what you can supposedly win if you collect enough virtual item.

Gem Hunter lets you spin again if you watch a video.

You can withdraw a specific amount of money via PayPal or Amazon Gift card if you meet the following requirements:

Is Gem Hunter Legit? Does it Pay?

Although it suggests you would get $1000+, you should not expect to earn a single penny!

While reading the reviews on Google Play, I coudn’t find anyone who was able to cash out.

There are two possible outcomes for those who play for long enough. Players will either get stuck at $99 or wait for the money forever.

Note that you will earn less and less “money” over time, and the green gems may eventually disappear. Besides, the slots

So, they will lure you into watching lots of ads because they know you don’t want to give up on your reward.

Even if you reach $100 and cash out, they won’t pay you. Some people cashed out, but they are still waiting for over two weeks!

Gem Hunter is a nice game to kill boredom, but only the developer can make profits through the ads you watch.

It’s important to know he has no obligation to pay users since virtual items are worthless.

Most people get stuck at $99 as the app has full control over what they earn. No, it’s not about luck!

Sadly, many people waste time playing Gem Hunter just because of how the game was advertised.

Don’t trust anyone who claims or suggests you can earn easy money. Chances are the one offering the opportunity is the only beneficiary.

Thanks for reading my Gem Hunter app review. I hope it helps you make an informed decision. So, what are your thoughts about this game? Did you get stuck?