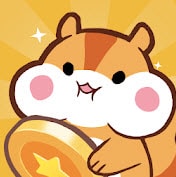 Over 1 million people have already installed Cutie Garden in hopes to merge enough cute creatures and cash out $100 via PayPal.

The game is cool and very addictive, but it becomes boring after unlocking a couple of levels. However, the cash incentive will encourage you to keep playing and watching a ton of sponsored videos!

There are several similar games on Google Play and App Store, but unfortunately, I am yet to find someone who received the money.

You are here because you care more about the money than the game itself. So, will Cutie Garden pay you? Is it a scam or a legit app?

If you want to earn a full-time income working from home, don’t forget to check out my #1 recommendation. This is the same program that helped me reach $1,600 per month and quit my job in 2019.

What is Cutie Garden?

Cutie Garden is an addictive merging game available for Android and iOS devices. The goal is to combine identical animals to unlock a new one at the level above. It’s very similar to this puppy game that I reviewed a while ago.

Whenever you unlock a new level cutie, you will earn virtual cash rewards that will accumulate in your account balance. Then, you can supposedly withdraw the money via PayPal if you ever reach $100.

You can also use collect puzzle pieces to win different prizes such as an iPhone 11, Gucci Bag, and a Versace Watch.

Cutie Garden is funded by advertisers, which means you will be “forced” to watch annoying clips from time to time.

Usually, those videos are very misleading as they depict players making huge sums of money. Don’t fall for any of them!

Is Cutie Garden Legit? Does it Pay?

I hope you understand that I cannot call Cutie Carden a scam without proof, but it’s very unlikely that you will reach $100 and receive the money.

Unfortunately, it works just like Puppy Town, Doggy GO, and many others! All of these merging games use the same tactic to avoid payments on a large scale!

It starts by giving you a decent amount of virtual cash, but your earnings will decrease as you get closer to $100. Therefore, you will probably get stuck before reaching the minimum payout.

Lots of people are writing a review to say that $100 is unattainable. Indeed, I couldn’t find any player who cashed out.

Those who left a positive review did so because the app developer asked them to rate the app within the first minutes of gameplay.

If you check the app rules, it says there is an upper limit to the number of withdrawals on a given day. Therefore, even if you reach $100 and request the payment, they can tell you that it’s not available.

If you are sick and tired of using apps that don’t pay, Check out my top recommendation!

How Does Cutie Garden Work?

You can install Cutie Garden on Google Play or App Store and start playing free of charge. You are not required to register, but they will ask permission to access your device’s location and manage phone calls.

Why on earth a game would like to make phone calls using my device? Many people think they have to allow such permissions to play, but they can simply choose to “Deny”. Do this if you don’t put your device at risk!

How to Play Cutie Garden

As I mentioned in the beginning, you have to combine animals of the same level to unlock new ones at the level above.

See Cutie Garden in action in this video:

Keep in mind that you cannot convert coins to cash rewards. Instead, you can use coins to buy animals so that you can continue merging and growing the level.

Whenever you unlock a new animal, you will earn virtual cash, which is around $1 – $2 in the early stages. But as you already know, the more you play, the less you will earn.

Once you merge two level 50 animals, you have the chance to get a Rainbow Unicorn by merging 2 fortune Unicorns. For each Rainbow Unicorn, you can get dividends of up to $200 per day for 7 consecutive days.

One player said she collected 12 Rainbow Unicorns but they just kept saying she needed more! So, don’t expect to earn any dividend from this app.

You can also collect puzzle pieces to win several prizes such as iPhone 11, Gucci bag, and Versace Watch.

Depending on the prize, you must collect 10 or 20 puzzle pieces by playing the Lucky Spin and the Bubble of Puzzles. Watching a video is always required before spinning the wheel or opening the bubbles. 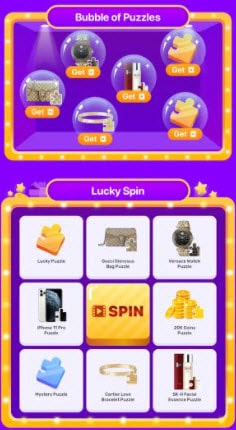 It’s doesn’t surprise me the fact that lots of people struggle to find the last puzzle piece. If winning an iPhone 11 was so easy, everybody would playing Cutie garden instead of buying the iPhone for U$700!

Cutie Garden is another game that will likely make you watch a ton of videos in return for nothing. That is because you will probably get stuck and give up before reaching $100.

Lots of people report they have been playing Cutie Garden for many consecutive days with no money to show for it.

If you need money, avoid Cutie Garden and any other game that pays via PayPal. They are all advertising machines working in the owner’s best interest.

If you are serious about making money online, I suggest you build your own online business. With the right strategy and mindset, can make thousands of dollars per month by providing helpful content and promoting products as an affiliate.

In 2015, I joined an excellent step-by-step program that helped me set up an affiliate website from scratch and make money on my own terms.

They have a free membership where you can test drive the training and community with no strings attached. Why not give it a try? >> Click here to learn more!

Thanks for taking the time to read my Cutie Garden app review. If you want to share your opinions about this game, leave us a comment below.

Top 10 Secret Shopping Apps To Earn a Side Income